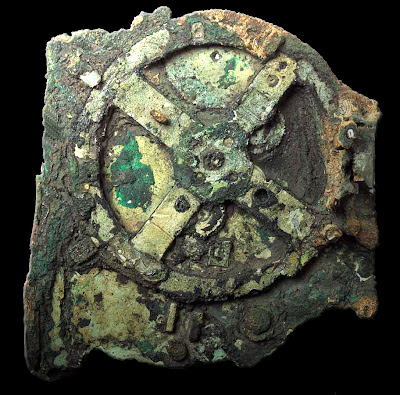 This device is just extraordinary, the only thing of its kind. The design is beautiful, the astronomy is exactly right. The way the mechanics are designed just makes your jaw drop. Whoever has done this has done it extremely carefully ... in terms of historic and scarcity value, I have to regard this mechanism as being more valuable than the Mona Lisa.

Professor Michael Edmunds of Cardiff University,  leader of a study of the mechanism, 2006.
(Wikipedia, Antikythera mechanism)


National Archaeological Museum of Athens:
THE TEMPORARY EXHIBITION OF THE MECHANISM AND THE ANTIKYTHERA SHIPWRECK

The wreck is dated aproximately in 60-50 BC, though its cargo from the 4th to the 1st century BC. The study of the cargo will deal with the circulation and trade in the East Mediterranean from the point of view of the aesthetic taste of the rising Roman elite in the end of the Hellenistic Era and the Rome’s democratic period.

Τhe recovery of the Mechanism among the other objects from the cargo of the ship that sank off Antikythera makes this shipwreck unique and of major importance.

The Antikythera Mechanism is the earliest preserved portable astronomical calculator. It displayed the positions of the Sun, the Moon and most probably the five planets known in antiquity, Mercury, Venus, Mars, Jupiter and Saturn. It was used to predict solar and lunar eclipses, it kept an accurate calendar of many years, and displayed the date of Pan-Hellenic games that took place at Nemea, at Isthmia, at Delphi, at Dodona and at Olympia.
It contained at least 30 gearwheels as well as dials, scales, axles and pointers. The greek, astronomical inscriptions on the surface of the Mechanism refer to astronomical and calendar calculations, while the inscriptions on its metal protective plates contain instructions for its use. The Mechanism was protected by a wooden case, which had a bronze plaque on the front and the back side.

Its construction dates to the second half of the 2nd century BC. Its technology, which recalls the successors of Archimedes and the school of Poseidonius on the island of Rhodes, was the result of the development of philosophy and of exact sciences that took place in Greece until this era, and also draws on knowledge of the Hellenistic Age (celestial parameters, mechanical design and use of epicyclic gearing). The Mechanism bears witness to the astronomical, mathematical and mechanical ingenuity of ancient Greeks in Late Hellenistic period.
(National Archaeological Museum of Athens: The Antikythera Mechanism)

Liana Koutrolikou - DICTIONARY of Turkish Loans of the Greek Language